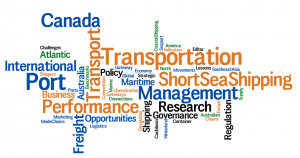 Dr. Brooks is an internationally recognized researcher in transportation management and policy, international marketing, and international strategic management. She has acted as a policy advisor to governments in Canada, Europe, the Caribbean, and Southeast Asia and consulted widely in the transportation industry. Current research work focuses in three broad areas—liner shipping regulation, port governance and performance, and short sea shipping and cabotage.

Starting with a PhD dissertation in the early 1980s, liner shipping research has spanned a period of 40 years. That research has been revisited in four waves, two longitudinal studies on what guides carrier selection, a third wave examining strategic alliance formation culminating in a 2000 solo publication Sea Change in Liner Shipping: Regulation and Managerial Decision-Making in a Global Industry, published by Pergamon Press. Since then, monitoring of liner shipping regulation in 8 countries (U.S., Canada, Europe, Japan, China, Hong Kong, Korea and Australia) has continued. A preliminary look at results was provided in London in September 2018. A research Technical Report on the European Consortia Block Exemption Regulation with the University of Antwerp (Hilde Meersman, Christa Sys, Thierry Vanelslander and Eddy Van de Voorde) has been completed and was presented at the meeting of the International Association of Maritime Economists in Athens in late June 2019. Technical Report: Regulation in the liner shipping industry: pathways to a balance of interests. This research was intended to provide regulators some insights in the findings of multidisciplinary research regarding the review of the Consortia Block Exemption Regulation No 697/2014 of 24 June 2014.

In early 2020, Mary R. Brooks began work with Geraldine Knatz, Thanos Pallis and Gordon Wilmsmeier to explore the Transparency of Port Governance. Phase 1 of this study examined transparency in the largest public ports in Canada, U.S., Europe and the ECLAC region. The findings provide food for thought as governments explore port reform. The research informed a presentation in Canada in late May 2020 to a Canadian Transportation Research Forum webinar on the Port Modernization Review in Canada (posted to the Speeches and Webinars tab), and at the virtual International Association of Maritime Economists Hong Kong conference in June 2020. What transparency means for port managers and stakeholders is a new field ripe for exploration and the Technical Report published is merely the beginning of a new research agenda in this field. Followup research on what stakeholders want to ‘see’ will be presented at IAME in November 2021 and was published in the WMU Journal of Marine Affairs October 5, 2021.

What is effective transparency? Imposed through legislation or voluntarily adopted, effective transparency includes (a) an organization’s willingness to consistently communicate and make transparent information available to internal or external stakeholders and (b) the stakeholder`s expectations on the visibility and verifiability of information. Ιn their most recent publication on the topic, Mary Brooks, Geraldine Knatz, Thanos Pallis and Gordon Wilmsmeier  explore what different port stakeholders expect to be visible and readily available, their perceptions of how trustworthy board reporting is perceived; and examine similarities and differences across stakeholders and countries and the extent that ports currently make these variables visible and available – contributing towards a more transparent and thus better port industry.

In 2016-17, Drs. Brooks, Kevin Cullinane and Thanos Pallis co-edited a volume Revisiting Port Governance and Port Reform: A Multi-Country Examination for Elsevier’s Research in Transportation Business and Management. The volume contained 25 country studies on experiences with port reform, and focus on lessons learned from efforts to attract new business through governance reform or address competition in the industry through deregulation or privatization of the sector. Please see the Publications page for connections to this work. In addition to this work, there has been solo work since the early 1990s on port reform in Canada feeding into a submission to Canada’s 2018 Port Modernization Review and work with Sheila Farrell on assessing Richard O. Goss’ principles for port policy. (See the publications page for this work.)

The last meeting of the Port Performance Research Network (PPRN) was held in Athens Greece on June 25, 2019. In 2016, the chair of the PPRN was handed over from founder Mary R. Brooks to Gordon Wilmsmeier. The new website has been established and the 2012-2018 presentations are available for download there. The Hong Kong meeting planned for 2020 was postponed to 2021. The 2021 meeting is scheduled for Rotterdam in november 2021.

I believe we now understand how a user-orientation can help ports in continuous improvement efforts and have  from 2009 to 2014 conducted several studies (in Canada and the U.S.), developing a final tool SEAPort (Service Effectiveness Assessment for PORT managers) to assist ports with making improvements in their relationships with customers and users. The SEAPORT tool was available for North American ports in 2014 but results are proprietary to participating ports and not publicly available.

Five studies have resulted from the data collected and all have been published. Links have been posted on the publications page. The 2012 public report for the AAPA is available for download by clicking here: AAPA Report Final.

In an effort to understand short sea shipping, where and under what conditions it works, Jim Frost and Mary R. Brooks have consolidated lessons learned from a large number of studies into a book chapter about short sea shipping published in the The Routledge Handbook of Transport Economics as Chapter 20: “Short Sea Shipping and Ferries”. A link to the publisher is available on the publications page. More recently, this work has been extended to urban ferries and our research has been accepted for publication: James D. Frost and Mary R. Brooks Seeking Economic and Social Success with Sustainable Urban Ferry Services, in Handbook of Public Transport, Eds: Corinne Mulley, Stephen Ison and John Nelson, Routledge.

Research with UN ECLAC colleagues has looked at the development of short sea shipping in South America, and specifically Chile. The first project looked at the role of regulation in inhibiting short sea development and was published in Ocean Yearbook volume 28 in 2014. The second study of two corridors and their promise for development of short sea services was completed in the fall of 2016 and has been published in Transportation Research Record. It was presented January 11 at the Transportation Research Board in session 816. It recommends an agenda for future stated preference research as was done in Australia (see below). Please visit the Seminars and Webinars page for a link to the presentation and the publications page for a link to the article.

Based on earlier Australian research, a paper on The Changing Regulation of Coastal Shipping in Australia was presented at the IAME conference in Taipei, Taiwan, 6 September 2012 and was published in the first issue of 2014 of Ocean Development and International Law in January 2014; the DOI: 10.1080/00908320.2014.867191. A chapter on coastal shipping permits and cabotage regulation was also published in a book honouring Edgar Gold (see publications tab). In addition, this research was used in a seminar on short sea shipping and regulation in Puerto Montt, Chile on 24 August 2012 (see Seminars and Webinars tab).

Continuing the theme of short distance shipping, from January to May 2010, Professor Brooks was  a Visiting Scholar at the University of Sydney’s Institute for Transportation and Logistics Studies (ITLS). During this time, research on Australia’s coastal shipping industry was begun and four publications have resulted from the time there. The paper with Helen Bendall, Short Sea Shipping: Lessons For or From Australia? was presented at the International Association of Maritime Economists Annual Conference in Lisbon in July, and was the winner of the Prize for the Best Paper on Short Sea Shipping, awarded by The Blue MBA, Copenhagen Business School. It is available as Working Paper 12 in 2010 from ITLS. The research was published in the 3rd issue of 2011 of the International Journal of Shipping and Transport Logistics. The followup research on mode choice for Australian freight shippers has now been analyzed and is available as Working Paper 20 in 2011 from ITLS. It won the Best Paper prize at the IAME 2011 conference in Santiago Chile and the prestigious Korea Association of Maritime Industry Prize in 2012. It was published in Maritime Economics and Logistics, volume 3 of 2012.

After a long hiatus from research into shipping and cabotage, Dr. Brooks was pleased to be invited to participate in the International Transport Forum 2009 organized by the Joint Transport Research Centre of the Organisation for Economic Cooperation and Development in Leipzig Germany May 26-29. The conference theme was on Transport for a Global Economy: Challenges and Opportunities in a Downturn; she completed a research paper for the conference Liberalization in Maritime Transport, and presented it in Workshop 1.

Links to earlier research on short sea shipping and cabotage in Canada are available upon request.

Dr. Brooks has published more than 85 peer-reviewed articles and book chapters, and has authored or edited more than 25 books, technical reports and monographs, in addition to a software package in the international marketing/distribution field and seven widely used business cases. From 2010 to the end of 2016, she was one of two founding Editors of Research in Transportation Business and Management, and from 2003-2006 served as a Co-editor of Canadian Journal of Administrative Sciences.

Research support was provided to the Predictive Modeling Module of the Dalhousie Marine PIRACY (Policy Development and Interdisciplinary Research for Actions on Coastal Communities, Youth and Seafarers) Project (with Ron Pelot) and this was completed in July of 2013. The technical report on this component was published as Technical Report #10 and is available on the Publications page.

According to Google Scholar and other research tracking databases, Dr. Brooks is best known for the following: a 2004 publication entitled the Governance Structure of Ports (a 2000 solo publication); Sea Change in Liner Shipping: Regulation and Managerial Decision-Making in a Global Industry (published by Pergamon Press, an Elsevier imprint); her 2007 publication with Kevin Cullinane Devolution, Port Governance and Port Performance (published by Elsevier in the Research in Transport Economics series); a 2008 publication in Maritime Policy and Management with Thanos Pallis on assessing port governance models (DOI: 10.1080/03088830802215060); and one of her earliest publications (1982) on the export performance of Atlantic Canadian companies (out of print/no longer available).